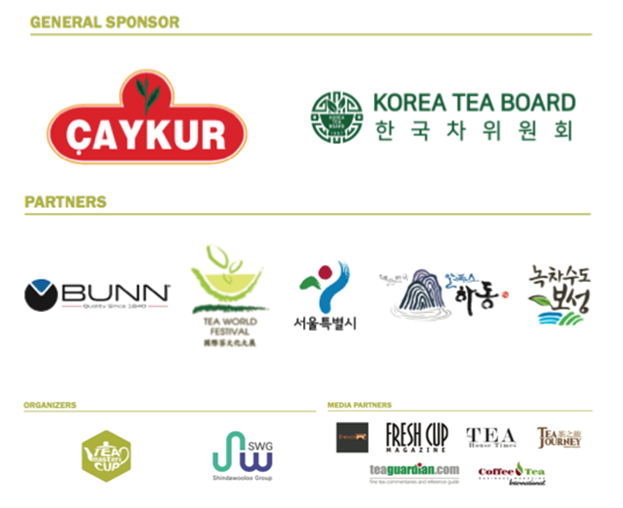 A unique international competition among tea professionals, the Tea Masters Cup™ (TMC),was held at the beginning of June in South Korea, at Tea World Festival, one of the largest and most successful beverage exhibitions of this region.

Tea Masters competed for the title of world champions in the three categories: Tea Preparation (where masters have to demonstrate the skill of tea preparation by brewing and presenting several beverages), Tea Paring (presenting tea in combination with a light food/snack) and Tea Tasting (tea degustation by identifying beverage samples of single varieties of teas).

During two days of competition tea masters showed to judges and spectaculars their performances and impressed everyone with ingenuity, careful preparation and high professionalism.

But there is only one champion in every category and judges had to determine the best tea masters. And after two days of intensive competition there were defined winners of each category.

Besides of first places there were given best results of every criterion.

Denis Shumakov (Russia), head judge and Chairman of Advisory Board of TMC International.

Hyung Jang (Korea).Chair of Asia Cultural Exchange Foundation. He is teaching a course of Tea Studies at the University. Abbot of Daewonsa — a 1000 year old Buddhist monastery in Boseong.

DorcasBungei (Kenya), tea family member, plantation owner, First secretary of the Embassy of Kenya in Korea, She has been working closely with Tea Board of Kenya (TD) and Kenya Tea Development Agency(KTDA) to promote Kenyan tea in diplomatic level.

SharynJohnston(Australia), Founder of Australian Tea Masters, developer of the only government accredited Tea Sommelier Course, the first set of tea standards for Australia. Judge for Golden Leaf and other tea competition in China, Vietnam and Korea. Member of the Chinese Tea Experts committee.

The MCs of the competition were AlionaVelichko (Belarus) and William Lee (Korea).

During competition there were also conducted tea ceremonies and tea presentations. Tea Specialists Yuri Podusov (Latvia) and Alexander Wagner (Russia) made the Presentation of tea brewing in a free style and demonstrated special technique of tea preparation called Wolverine.

After intensive days of competition the whole group of masters and guests drove to see Korean tea plantations. They were also able to see Korean tea ceremonies and take part in them, make their own tea and see Tea Museum. They had a unique possibility to live in a Buddhists

monastery and learn Korean tea culture and way of life.

According to Mr. Ramaz Chanturiya, the Chairman of the Tea Masters Cup, “Second Tea Masters Cup International 2016 was held at a very high level and in fact confirmed the importance of the existence of this unique international project! Last year 5 countries took part in the final round of the championship and this year we have already seen representatives of 11 countries. And in the future cycle I expect to see this figure doubleв.The success of this project is natural – the representatives of different countries and cultures of tea have the opportunity once a year to show their best achievements, exchange experience with colleagues, to expand their professional horizons.In addition, each presentation of a master is a contribution to the whole tea culture, a new signal to creativity for thousands masters in different countries.And actually it is not so important who is the winner, although it is essential and a champion has a special responsibility!But we must never forget that the main beneficiary of the whole process is His Majesty – Tea.

I know that Tea Masters Cup International gave every tea master opportunities to show the world tea culture and it is a significant event for the world of tea as a whole.

Caykur as one of the world tea market leaders always pays great attention to the development of tea culture and support new initiatives, which are useful for tea market. Therefore, we were willing to help once again to hold this world championship among tea masters and will follow with interest the development of this project in the future.”

Mr. William Lee, Executive Director of Korea Tea Board says, «I believe 2016 Tea Masters Cup in Korea has opened the door to many young tea professionals around the world, since Korea has not been known as tea country to the international tea committee in despite of its millennium history of tea. In merge with its high traditional culture from noble family and the Buddhist monastic life have offered Tea Masters around the world an opportunity to take a glimpse rich tea culture of Korea. When tea masters went back to their home country, I wish they have taken not only the unforgettable memories during the journey but also rich tea culture of Korea in their hearts. Korea Tea Board welcomes all tea masters to come back to Korea with their friends again. Tea Masters Cup is such a great platform to put all tea lovers around the world together in the same place where they can share their own heritages which I strongly witnessed during this trip. Despite of cultural, religious, and language barriers, everybody shared the moments together over a cup of tea!”

Tea Masters of the world, unite!

Let’s create a better future for the world tea market  together!

EventsWOW
EventsWOW.com is the foremost international leader catered to online B2B and B2C marketplace fervent in exhibitions worldwide to generate effective business leads and earning the integrity of billions of users who will access this website.

Other Events of Organizer

Use the 'Text' widget in the 'Post Detail Page Sidebar' to make any information you wish to display in this sidebar area.