PT. Global Expo Management (GEM Indonesia) is a Professional and leading organizer for international specialized trade exhibitions based in indonesia. Since its established in 2009, GEM Indonesia has earned its reputation as an success organizer to hold the worldclass trade exhibition in automotive, maritime, coating port, electronics, ICT, Palm and commercial vehicle sector in indonesia. with high motivation and hard working, GEM Indonesia has achived success to organizer several largest exhibition in southeast asia in a short time such as INAPA-The ASEAN's Largest Auto Parts, Accessories and Equip Exhibition and IIBT- The ASEAN's Largest Bus, Truck and Component Exhibition.

Trade and Professional Only (Visitors Under 18 will not be admited)

* Agricultural Machinery and Equipment for:

* Fruit, Vagetables and other special crops

* Electronics and Equipment Measuring and Weighing For Plant Production

Indonesia with 240 million of population is the largest economy in southeast Asia, is one of the emerging market economies of the world, and also the member of G-20 major economies. Domestic Consumption is one of the major Driving forcesss behind the country's economic growth. The economic growth slowed considerably during 2007-08. However, like india and china, Indonesia recorded higher growth during the global financial crisis, compared to the other G50 members with GDP 5.5% in 2009

Each year the Iowa Deer Classic brings to the hunters of Iowa and the Midwest a weekends worth of trophy whitetails, world class hunting seminars, hunting and outdoor exhibitors, hands-on archery opportunities and much more. 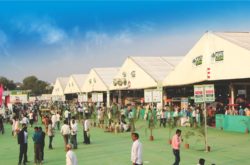 Agrovision is a combination of Exhibition, Workshops and Conference which provides an excellent platform for the farmers and the agriculture industry to explore various opportunities. The 4-day knowledge imparting movement is no more restricted to the farmers of Vidarbha or Maharashtra as it has turned into a major annual activity… Read more…

The 17th consecutive year Ciney Expo will again honor the agricultural world, horticultural and civil engineering through professional fair Agri Occase. The event is going to be held on 05-06 March 2016 at Ciney Expo, Ciney, Belgium. This show offers the public in order tools, variety, good quality and in… Read more…